From Modest Origin to CEO and Non-Profit Founder

Daniel Perkins, Class of ’74, rose from humble beginnings to become owner and CEO of MTS Technologies Inc., of Arlington, VA, and founder of The Challenge Program. 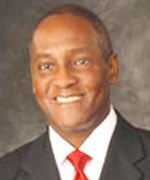 Perkins said in a Tribune Democrat interview that his first job was shining shoes at a Johnstown car wash at age eight. It was then that Perkins had a chance meeting with John P. Murtha, who owned the car wash. U.S. Representative Murtha had gone to Pitt-Johnstown and served 36 years in the U.S. House until his death in 2010.

"I was impressed with the degree of attention he gave me," Perkins said in the Tribune-Democrat interview, published May 13, 2016. "He always had time for me. He was an extended parent when I was at his car wash."

All Perkins needed was a nudge in the proper direction. Perkins recalled that, when he was 12, Murtha asked him: "Daniel, what are you going to do after you graduate from Pitt and get out of the Marine Corps?"

"I didn't know I was going to do either one," he said. "Those were the challenges he put before me and I ended up doing both."

The challenges were accepted and met.

After graduation from Greater Johnstown High, Perkins received his degree from Pitt-Johnstown, earned a master's degree from Pepperdine University in California, served as a commissioned officer in the U.S. Marine Corps., and started his own business, MTS Technologies Inc.

MTS is a service-disabled veteran- and minority-owned business with an office in Johnstown and Virginia.

Perkins now embodies his own version of the role Murtha played in his life and offers the following advice to students: "Focus on what you want to do. Strive to achieve it and work hard.

"It's not an easy street. There will be challenges. But you've got to want it."