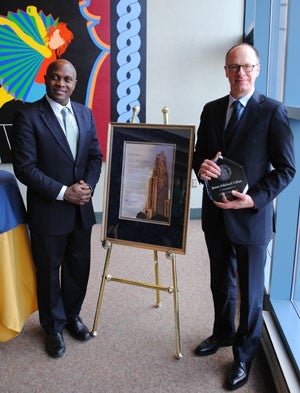 Fallon is currently editor of Women’s Wear Daily, a Fairchild Fashion Media publication often referred to as “the fashion bible.” Fallon began his journalism career while at Pitt-Johnstown, and interned with the Tribune-Democrat. He attended Stanford University on a full academic scholarship and earning his master’s degree in journalism, he returned to Johnstown and rejoined the Tribune-Democrat staff as a copy editor.

In 1979, Fallon began what would become a distinguished career with Fairchild Publications, the precursor to Fairchild Fashion Media.

He was news editor in the company’s 35-person Washington, D.C., bureau and, two years later, was appointed chief of Fairchild’s London bureau.

He became editor of Women’s Wear Daily in October 2001, and was recognized for excellence in 2003 as recipient of the prestigious Design, Impact, Vision, Atlanta award from AmericasMart.