Bohan Qu, ’18, is on a fast track to success. He completed a double major at Pitt-Johnstown ahead of schedule and is now enrolled in the Columbia University master’s program in the computer science natural language processing track. 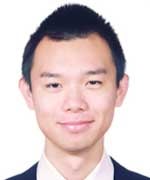 Qu's double major was in computer science and mathematics and he achieved Dean’s List honors in each of his terms at Pitt-Johnstown. He graduated in three years.

He and math professor Stephen Curran, PhD, submitted a paper for publication in Mathematics Magazine.

Qu is from Beijing, China. He interned at the Key Laboratory of Intelligent Information Processing at the Chinese Academy of Science.